This is the fourth in a series of articles on the importance of dialogue as the basis of Significant Conversations: Evangelism that resonates with our Canadian context.  The first two articles provided theoretical support for dialogue, in contrast to proclamation, as a valid and effective method of evangelism for our Canadian context. The previous article introduced some practical steps towards developing skills that lead to productive and healthy dialogue. This article provides further tools to that end. Significant Conversations coaching is available to FEB churches with the goal of developing local church based support networks that encourage, equip and empower people to converse in contextually sensitive ways about the values and beliefs that shape our lives.

The Pool of Meaning 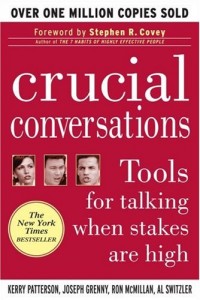 In their book Crucial Conversations, Patterson et al. claim that “at the core of every successful conversation lies the free flow of relevant information. People openly and honestly express their opinions, share their feelings, and articulate their theories. They willingly and capably share their views, even when their ideas are controversial or unpopular.”1 The essence of Significant Conversations lies in developing the awareness and skills that turn a potential clash of opinions into a genuine dialogue that allows both sides to freely express their values and beliefs.  This “free flow of relevant information” is also called the “pool of shared meaning.” People skilled in dialogue are able to address controversial and uncomfortable subjects in such a way that other views are respected, heard and appreciated.  Everyone is invited to put their thoughts into the pool of meaning. “People who are skilled at dialogue do their best to make it safe for everyone to add their meaning to the shared pool-even ideas that at first glance appear controversial, wrong, or at odds with their own beliefs. Now, obviously they don’t agree with every idea; they simply do their best to ensure that all ideas find their way into the open.”2

This parallels E. Stanley Jones’ methodology of holding round table dialogues.  Jones was a Methodist missionary in India during first half of the 20th century who promoted and facilitated forums in which people were encouraged to express their faith.  The focus was on religious experience and how that related to their faith; relational truth as opposed to a philosophical discussion of theology and doctrine.  Everyone expected to learn and everyone expected to be heard.  Those who “knew Christ were testifying to something redemptively at work at the heart of life.”3 Because we trust that truth is permanent and lies have a short life-span, we encourage people to put their thoughts into the pool of shared meaning where they can be examined and tested.

What are some of these tools that can help us become facilitators of Significant Conversations?  There are more principles in the Crucial Conversations book than can be shared in this article, but we will examine three tools that provide an sampling of what can be done to create conversational space that leads to positive interactions.

The key to successful dialogue is not having clever answers or quick comebacks.  Rather, as Patterson et al. insist, it “starts with the heart.”5 Those who are capable of providing an environment in which constructive dialogue occurs are aware of more than the content of the conversation.  In particular, they are able to monitor their own reactions, notice when they are tempted to act improperly, and take steps to correct their conversation style.

When our values and beliefs are challenged, we begin to feel unsafe and as a result may react in unhelpful ways.  Rather than respectful responses and attentive listening we resort to tactics in order to either control or “win” the conversation. We may use sarcasm or claim support for our ideas in a way that is dismissive of others.6

Those good at dialogue recognize when they are feeling defensive or unsafe and take steps to address it.  A number of steps are helpful:

1. Discover your own default style under stress so that you can identify it.  Patterson et al. have a free online test that will help you do this.

2. Step out of the conversation7 and be transparent.  Say, “Can we pause the conversation a moment?  I’m feeling a bit uncomfortable, and I don’t want either of us to feel attacked or dismissed.  I would like to hear what you have to say, and for you to hear my thoughts.”

3. Remind yourself of what you really want for yourself and your conversation partner.8 If you catch yourself striving to win at the other’s expense, acknowledge it, apologize and move away from that desire. If you can maintain a posture of two friends examining an issue, albeit from different viewpoints, both of you will continue to be encouraged to put your views into the pool of meaning.

Furthermore, good dialogue monitors are aware when others feel threatened or uncomfortable and take steps to make it safe for others to talk constructively.

Patterson et al. point out that those who are skilled at holding crucial conversations are sensitive to both their own feelings and the defensive reactions of others.  They recognize the tensions and emotions that get in the way of healthy dialogue, step out of the content of the conversation to address those emotions, and then, when the participants feel safe, return to the topic of concern.9 This requires honesty, transparency and clarity of purpose.  Rather than the content, we need to focus on the conversation partner.

This skill resonates well with our goal as Christ’s followers to exhibit grace and love when relating to others.  Concern for the person needs to trump any desire we have to state our opinion or win an argument, and when we communicate that priority as we deal with others, trust is developed.  This does not mean that we shy away from speaking the truth if we think people may be offended.  Rather, I am suggesting that there are steps we can take to make it safe for all to contribute to the pool of meaning in such a way that when we do speak God’s truth, it can be heard without provoking unnecessarily defensive postures that drive others away.  We are actually creating an environment in which the truth can be spoken and listened to.

For example, instead of jumping into a conversation by addressing a topic that someone has raised, ask permission to engage the person in conversation.  Rather than stating, “I think it is wrong for people to…,” say “I have a different opinion about that.  I would like to discuss that more with you.”  This not only prepares the person for your alternate viewpoint, but also communicates that you want to have a respectful discussion, rather than issue a challenge.

Another way to create safety is to use contrasting statements.10 If, during the conversation, you sense that the participants are becoming defensive and emotional because of something you have said, step out of the conversation and state what you don’t intend, and also what you do intend.   “I don’t mean to insinuate that you don’t care about…. What I do want to point out is how we have different priorities and values concerning….”  By talking about the conversation, safety can be restored.

For example, abortion is a very sensitive topic.  A strong pro-life stance can make people very defensive so they respond with an emotional attack.  Rather than retreating (silence) or reacting in kind (violence), a possible approach could be the following: “I don’t mean to insinuate that you do not have a respect for the sacredness of life.  Your concern for the well-being of the mother demonstrates your desire for her best.  We have different priorities and values concerning what is best in this situation.  I think it would be helpful for us both to better understand each other.  I would be interested in hearing your concerns.  Would you be interested in hearing where I’m coming from?”

My oldest son knows how to push my buttons.  I can ask an innocent question, and he will respond in a way that irritates me.  What is going on?  Do I really have buttons so that when someone says a particular sentence, I will be irritated?  No.  The reality is that my son and I have a long history of conflict.  When he makes a particular statement, I immediately relate it to incidents in the past and interpret the statement to mean more than is immediately evident in the words.  That is, I immediately make up a story about what he truly means.  Patterson et al. inform us that the best at dialogue recognize that behind our reaction to a comment made in conversation is a story that we have invented which interprets the person’s statement.11 If someone laughs or rolls their eyes when we are saying something that is important to us, we can react with hurt or anger because we have told ourselves a story about why the person laughed or rolled their eyes.  The tendency is then to respond to that story we have told ourselves even though the reality may be very different.

However, if we want to be good at dialogue, we will “take control of our stories.”  We need to “retrace our path” that led to the emotional response.  Crucial Conversations provides four steps:

One of the fears we have as Christians (or at least I have) is that we will be ridiculed for our faith.  Although this is seldom the case, it is very easy to interpret people’s responses to our comments as a personal rejection or snub.  When we feel rejected, we need to step out of the content of the conversation and go through the four steps.  Once we recognize the story we are telling ourselves, we can learn to tell ourselves a different story, or at least discover if the story we are telling is the correct one.

The Goal of Significant Conversations

Those involved in Significant Conversations seek “influence without apology or attack”.13 Posterski points out that our Canadian sensitivity to political correctness in conversation tends “to pre-empt open discussion which might contain or imply anything negative about feminism, gay rights, aboriginal peoples, other minorities, or other world religions. The informal social policy pronounced by political correctness seems to elevate social sensitivity above truthfulness. A more discerning approach would propose that all views should be subject to scrutiny, including the ‘politically correct’ agenda.”14 As Christians, there is no need for the existence of different views to cause us to keep our opinions to ourselves, or, alternatively, to get into a fight about who is right. There is an important third way of dialogue in which differing views can be heard by all participants. Furthermore, within that “pool of shared meaning” there will be room for the gospel.  But it requires an intentional and skilled approach, supported by the prayer and encouragement of other believers, to develop an environment in which such discussions can be held with respect and effectiveness.