My understanding of apple orchards comes from my youth. I remember walking through an orchard – large trees were spaced far apart with foliage and branches providing great shady areas. Harvesting the fruit required climbing ladders, and there was significant waste as apples fell and were bruised when inadvertently shaken from the tree.

One day, when I drove by an apple orchard in the Okanagan region of BC, I was astounded to see fruitful apple orchards that looked different from what I was used to. What surprised me was that these were not large trees spaced far apart taking up vast areas of ground. Rather, the “trees” looked like short, skinny branches stuck in the ground close to each other. Yet, they were full of large, delicious looking apples. 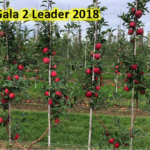 Modern apple production has benefited from the development of more fruitful ways to grow apples. A traditional orchard has about 36 trees per acre.[1] In recent years “high-density” orchards have been replacing classic rows of fully-grown trees. The trees in these high-density orchards are referred to as “leaders” and are slight enough to require support like vines and they are planted much closer together than trees in traditional orchards. Because “high-density” orchards have more apple trees per acre, the result is a greater crop yield on the same amount of land. They also produce fruit more quickly after planting – from three as opposed to eight years – and, while being more labor intensive, in some ways these trees are easier to manage as well as harvest.[2]

These insights into productivity and fruitfulness of apple farming can be helpful in understanding the principles and practices promoted by Disciple Making Movements (DMM).[3]  DMM asks the question, “Are there fruitful activities[4] that would result in increased growth of the Kingdom as people come to Christ and join in the mission?” Such thinking assumes that it is possible to spend time in activities that are unfruitful, or less fruitful, in advancing God’s kingdom. It is also possible to be content with activities that we assume to be the normal modes of ministry and ways to live out the Christian life, but cause us to miss out on different actions that are channels for the abundant fruit God can supply. It also opens the possibility that we can better conform our ministry efforts to the ways God works in and through people.

Such fruitful activities are not “shortcuts” or “silver bullets” as some claim.[5] Even as an increase in apple production requires experimentation and labor that is not needed with traditional methods, so DMM principles and practices require as much or more dedication, hard work and contextualization as is required in any area of ministry. The promise is not one of easy ministry or quick fruit. Even as apple growers have discovered methods of cultivation that provide better results, so DMM principles and practices are a recognition that there are ways and means of doing ministry that better disseminate the gospel message, connect with the spiritual hunger of those who need the salvation of Jesus, and provide a greater opportunity for multiplying movements. Such efforts require dedication and sacrifice that can be more rigorous than what is observed in less fruitful activities. This could be compared to the traditional method of apple production which takes less thought, experimentation and effort than modern apple production, with less yield.

Neither does the pursuit of more fruitful activities circumvent the role of the Holy Spirit. The only way apple production can become more fruitful is to work with God’s design of how apples are grown. The “spirit” or life of the apple is found in the tree that produces apples. Apple growers seek to enhance the environment, the cultivation, and the harvesting of the fruit to generate a better yield. But this comes about by working with the reality of God’s created dynamic of apple growth. Similarly, the only thing that counts in Christian ministry is the one thing that we, as ministers of the gospel, cannot do – change people’s hearts. This reality requires us to conform what we do with the way that God works so that the transforming message of the cross is not limited, but given the greatest possible scope for impact. Setting our sails for the wind of the Spirit has also been used as a metaphor for this truth,[6] recognizing that the Holy Spirit also works in and through the minister of the gospel.

Apple growers who were dissatisfied with traditional ways of cultivating apples began to discover more fruitful ways to increase the yield. Similarly, Christian missionaries, working among people who had been closed to the gospel for years, were driven by a “spiritual discontent” because of the lack of spiritual fruit. They were not creating a new model so much as discovering ministry activities that fit better with the way God works to draw people to himself. The Spirit was ready to be poured out and God was calling them, like John the Baptist, to “make straight paths for him” (Mk 1:3). In the spirit of the 16th century reformers, these innovative missionaries continued the tradition by cultivating the mindset of “always reforming.” By reflecting on how God worked in Scripture, they sought ways to reflect such practices in their ministry context. DMM is the attitude that says, “What are the practices that God blesses with fruitfulness? What should I stop doing? What do I begin doing, and how do I do it?”

In the next article we will begin to look at a few paradigm shifts of those activities that have produced fruit and hold the promise that they will continue to do so. Those willing to learn from others who have planted orchards in which the Spirit of God has brought forth significant fruit know that these activities are not easy and they require sacrifice and commitment. But, as will be seen, many of them reflect the heart and effort of the apostle Paul who wrote:

[1] Seebregts, Greg. So, How Many Apple Trees to Plant per Acre? https://thehomesteadinghippy.com/apple-tree-density-per-acre/ accessed May, 2022

[2] McIntosh, Matt. The Science Behind Apple Farming. https://canadianfoodfocus.org/on-the-farm/the-science-behind-apple-farming/ accessed May, 2022

[3] There are important distinctions to be made between Church Planting Movements (CPM) and DMM, as well as acknowledging a variety of approaches represented in disciple-making movements, such as T4T and Four Fields. However, since this article focuses on the process of disciple-making principles and practices (DMM) as opposed to the result in terms of churches (CPM), and due to the preference for DMM in the author’s mission agency, Fellowship International, the terminology of DMM is used. See Reflections on the Theological Validity of Disciple-Making Movements (DMMs) for further discussion.

[4] The focus on ministry “activities,” rather than “models,” is deliberate. Viewing DMM as a “model” and then comparing and contrasting DMM with traditional “models” or the “legacy” church can result in less than productive push-back and defensiveness. DMM should be challenged and critiqued in order to be evaluated properly, but the blanket condemnation from some quarters has curtailed or even cancelled healthy dialogue. There is much overlap between models which all ground their methodology on the authority of Scripture as they seek to advance God’s Kingdom. But these are often downplayed in order to focus on the contrasts, which tends towards misrepresentations and  distorted generalities, and result in harsh and discouraging judgements. I therefore prefer to focus on “fruitful activities” as distinct paradigm shifts that result in more productive ministry, rather that proposing a comprehensive model that replaces other methodologies wholesale. These will be developed in future blogs.

[5] For example, see No Shortcut to Success: A Manifesto for Modern Missions (2022) written by Matt Rhodes and Matt Devers. Dave Coles has carefully and appropriately responded to the misunderstandings and misrepresentations within the book. See his article here.

[6] This popular adage has been used by DMM practitioners who see it as a call to critique, evaluate and adjust ministry practices with a focus on the fruit of multiplying disciples.