“Attractional” churches according to Michael Frost and Alan Hirsch are those congregations that develop “programs, meetings, services, or other ‘products’ in order to attract unbelievers into the influence of the Christian community.”  They argue that this approach is “increasingly ineffective” and is the result of “old Christendom” ideas that need to be replaced [1]. In contrast Milfred Minatrea includes both inward and outward focused churches under the heading “missional” and contrasts this category with stagnant “maintenance” churches [2].  In the previous articles I have argued for a middle road by proposing that the term “missional” should be limited to the missionary orientation of bringing gospel transformation in the world and a missional church has this as its primary orientation. 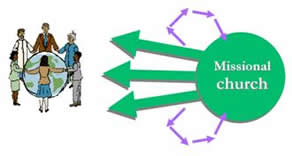 A missional church is a church that recognizes that it is on the margins of society and therefore moves out relevantly into its context.
At the same time, this orientation does not invalidate “attractional” or communal focused congregations and therefore should not be viewed as the only appropriate church model. A communal focused church has a role to play when it already holds a significant influence within its broader context and thus already shapes the community by conforming it to the values and practices of the church.

Even as the vision of Zion in the Old Testament was of the glory of God drawing the nations to the temple for worship, so this church seeks to be an alternate society whose communal expressions as the body of Christ are so influential that it is natural for people to come and be a part of their experience of the kingdom of God.  This phenomenon can be observed in small, traditional rural settings and, arguably, in the case of megachurches.

A church with a centered approach seeks to maintain the core value of living as disciples of Christ with little concern about defining who belongs to the organization or developing a sphere of influence controlled by the church. Thus a missional congregation defines its identity as followers of Christ within a non-Christian context where they are seeking to point others to the way of Christ.  The goal is not to have people “join a church,” but to develop significant social networks with those who are not disciples of Christ in order to awaken them to the realities of the kingdom of God.

Frost and Hirsch offer a helpful metaphor of wells and fences to illustrate the difference between these two organizational structures [3].  Fences serve farmers by keeping their livestock separate from their neighbor’s cattle.  By defining the limits, the identity of the cattle is ensured.  In contrast, when the land is vast, such as in the Australian outback, the farmer creates “a precious water source” from which the cattle do not stray.

Minatrea provides an excellent example of a centered, missional church with his description of Mosaic, a church pastored by Erwin McManus.  All members of the church are considered “bi-vocational staff.” Staff personnel do not exist to serve themselves, but others.  Thus, rather than drawing boundaries around the church of those who are “in” and “out,” the focus is on the “staff” living as disciples of Christ within their network of relationships.  “As a result of this change in language, Mosaic has commissioned more than six hundred staff persons as missionaries to the Los Angeles area” [4]. This is not a traditional church, but a mission organization partnering with God in his mission to the world.

Centered organizations in the Canadian context

In many ways our Canadian context is more comfortable with centered rather than bounded organizations. For example, companies are centered on their purpose of producing a financially viable product, but they are also outward focused on pleasing their customers.  The goal is not to have people join their organization, but for them to commit to the product.  Soccer organizations for kids have soccer committees whose role is to provide the organization and arrangements for the whole community of soccer families.  The “center” is the soccer experience and the primary concern is the broader community.  In Brentwood Bay, we have a summer program called “Music in the Park.” The committee’s “center” is to provide bands for the community to enjoy and so participate in the program.  The goal is not for people to join the committee.

Even as New Testament believers shaped their expressions of church around the cultural and religious structures with which they were familiar, so we also need contextualized expressions of the missional church for the Canadian context. Leaders who favor expressions of the church of Jesus Christ with a centered, missional orientation will have a number of priorities:

Standing in the World

Frost and Hirsch provide a stimulating illustration from Leonard Sweet [5]. Imagine a group asked to stand in a circle.  The tendency is for the participants to stand shoulder to shoulder facing inward.  This is an exclusive stance that emphasizes the division of those on the inside from people on the outside. But to turn and face outwards is also unhelpful as they lose sight of the center.  Rather a more helpful stance is for each participant to face one of the people standing next to him or her in the circle.  One arm can then reach inside (i.e., towards Christ), the other can reach outside (i.e., towards others).  Facing a partner symbolizes the fellowship and encouragement needed from those involved in the same ministry of bringing people to Christ.

A key part of FEBInternational’s missions efforts is to bring gospel transformation into new contexts.  This necessitates the planting of missional churches whose primary goal is to bring gospel transformation into their setting.  In Canada we now live in a primarily non-Christian context that requires the establishment of missional churches. Without them many people will not be reached for Christ.  Although both communal oriented and missional churches are valid within their appropriate settings, Canada has a great need for more missional efforts to deal with the reality of our context.  Part of this need can be met when communal oriented churches recognize that they have been moved to the margins of society and must now readjust their orientation in order to face the new reality.

One thought on “49. Missional Church 6: Centered vs bounded Churches”