104. A Retelling of the Prodigal Son 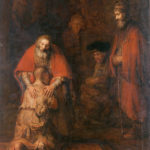 But then the story teller came who spoke of exotic foods, exciting entertainment and riches and comforts unimaginable beyond the simplicity of the farm.  The son began to yearn for more beyond his current life and experience.  He began to wonder if his father was holding him back. A great dissatisfaction soured the daily experiences of his life. (Gen 3.1)

Finally, he went to his father and said, “Father, I need more than what you are giving me.  I know that you have great riches.  Since I am your son, let me have a portion that I can use for myself.”  The Father replied, “You are not yet ready for your inheritance.  There is some maturing and development of your body, spirit, heart and soul required before you are ready to handle the inheritance without injuring yourself and others.  Nonetheless, here is the key to your inheritance.  It is there in that trunk.  But do not open it until I give the word.”  (Gen 2:16,17)

Each day the Father came to spend time with the son and oversee his development, but the son was distracted and found the lessons tedious, irritating and irrelevant.  His thought was on the inheritance and he didn’t pay much attention to his tasks.  Finally, the temptation was too much.  He opened the trunk and took the inheritance.  He heard his father and his older brother coming, but he quickly left out the back door before they could find him. (Gen 3:8)

“Finally,” he said, “I am free.” He headed for the city of the story teller and began to experience the foods, excitement and pleasures he had heard of.

One day, as he was dancing, eating and drinking at a party, in walked his older brother. “I have come to bring you back to our Father.  He loves you, forgives you and wants you back.”  The younger son laughed, “Look at me.  I have discovered life on my own.  This is real living.  I don’t need the father, I don’t need you.  Go away.”

Time passed and the pleasures became desperation, the relationships with his friends crumbled and the coin he had did not buy the excitement and happiness he had previously enjoyed.  Life had become empty and without purpose.  He found himself deeply hungry for more and began to suspect that he had sold out what had really mattered for shallow promises and empty glitter.  A great gulf had opened up before his feet and he saw the end rapidly approaching which is death and darkness.

His brother came again.  “Come back to the father.”  The younger son groaned, “I cannot. I am no longer a son. I have burned my bridges. I have deceived and been deceived.  I have lied and believed lies. I have sold my soul and become a slave.  I am no longer worthy. I have debts I cannot pay.  I have hurt those I love and wronged them in ways I cannot make right.  I have cheated and been cheated.  I am lost and cannot get home. I have died and cannot live.”

The older brother replied, “I have come to find you and bring you home.  I have come from the father to make things right and bring you back to life.  I have spent my inheritance to come and make things right for you.  I have taken on your debts, I have broken your chains, I have healed the wounds you have inflicted and can bind up yours as well.  Whatever wounds that should fall on you, I take on myself. Come, in our father’s house are many rooms of healing, wholeness and purpose.  Look at what the father has sent for me to give to you.” He then showed gifts of the father that would cover his nakedness, allow him to walk on the right path, declare his identity as a son of the father and feed his soul. (Luke 15:22,23)

The younger son hesitated.  “What if I take these blessings and just live here?  I don’t think the father wants my presence.”

His brother replied, “You misunderstand.  These blessings do not exist without the father.  It is only in the father’s presence that you become clothed and can walk in wisdom.  It is only by walking beside the father that you are his son. It is only by sitting by his side that you can eat and feed your soul.”

The older son smiled. “Lean on me. I will carry you home where you will be made whole. I give my life for your life because the father is the source of all life and will make all things right.”

“My son,” the father said to his oldest on their return, “you are always with me, and everything I have is yours. We can now celebrate and be glad because this brother of yours was dead and is alive again; he was lost and is found. Come sit by me.” (Luke 15:31,32)

2 Responses to 104. A Retelling of the Prodigal Son