94. God as Artist: Expressions of Goodness

In the Beginning: the Word

When I was a young boy, one of the mysterious verses in the Bible was John 1:1, “In the beginning was the word.”  I remember puzzling over this phrase and thinking it must mean the Bible, because that was “God’s word.”  But when I realized that the Bible was written long after “the beginning,” I began to wonder if it referring to one special “word” (maybe “Jesus”?) that God spoke.  Of course, most people just looked ahead in the passage and said, “The answer is in verse 14: ‘The word became a human being.’  It’s Jesus!”  But that won’t do; we cannot substitute “Jesus” for “word” in verse 1 because that undermines John’s message. He wants us to first think about “word” before we get to the incarnation. We are not intended to equate the “word” with Jesus until we get to that verse.  The amazing revelation is that this “word” – whatever it is – actually becomes a human being. But in order to appreciate why this is astounding, we first need to understand John’s use of “word” as something other than Jesus in verse 1.

In order to translate, we must first understand

When casually reading the Bible, we can skip over phrases that are puzzling.  However, that is not true for Bible translation. In order to translate, we must first understand.  Currently our Bible translation team is engaged in a review of the Sindhi New Testament1 and is partway through the book of John. So when we read, “In the beginning was the Word,” we had to think through what “word” referred to.

John does not begin his book with Jesus, a man who was born and lived in Israel 2000 years ago.  He doesn’t start with the Messiah, the chosen one of God to bring salvation to the nations, which is where Matthew starts. He does not commence with the title “Son of God,” which is Mark’s preference.  Instead, John describes something other than the man Jesus, the Messiah, the Son of God.  He turns our attention to the “word.”  But what is it that we are to understand?

It is surprisingly difficult to obtain a clear meaning of this term.  Commentaries and theological dictionaries tend to provide English equivalents of the Greek word, logos, such as wisdom, teaching, speech, reflection, knowledge, truth, the fundamental law and order of the universe, understanding, comprehension, and rationality.2 But while these are all legitimate terms, they are not sufficient to allow us to grasp the significance and impact of John’s phrase.

Another approach is to explore the equivalent Hebrew words used for logos in the Greek translation of the Old Testament – after all, that was Jesus’ and John’s Bible at that time.  In the Old Testament, God’s “word” refers to a revelation of his character and will, a declaration of truth, or a command.

These insights are the basis for the Sindhi translation of “kalam” – that which God declares, the message that God speaks – used for a Muslim audience. The Scriptures are commonly referred to among Muslims as God’s kalam.  For a Hindu audience, on the other hand, we used the word “vachan,” which refers to a promise, God’s declaration that cannot be broken, his covenant. However, these legitimate translations still do not bring us much closer to understanding John’s purpose in using this phrase to set the stage for the climatic declaration that “the word became a human being.”

pay close attention to the context

Fortunately, there is a way to discover John’s meaning. An important translation principle is to pay close attention to the context.  The primary context used by John is the creation story in the first chapter of Genesis.  The meaning of “word” in John 1 is drawn directly from the image of God’s creative activity. In the first verses of Genesis, God’s Spirit is “moving” over the chaos, a reference to the formless, empty, dark ocean. It is as if God is studying a blank canvas and since God is a God of order, not of chaos, and of light, not of darkness, something magnificent happens. 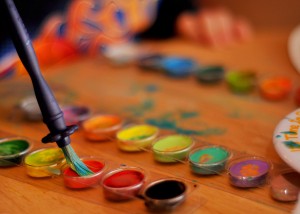 Creation is God’s artwork that reflects his character and nature. When he speaks, he expresses himself and light appears. God reveals himself in the form of light – and it is good. God then separates that light from the darkness because light, as an expression of his goodness, reflects his holy and pure nature: “God is light and in him is no darkness at all” (1 Jn 1:5).

As God continues to speak, he expresses his goodness in visible, tangible forms, and the world comes into being.  He separates the waters (chaos) and brings land (order).  Again he says, “This is good.”  Finally, he creates human beings.  We become expressions of God, little icons created to reveal the goodness and character of God. This time God says, “This is very good.”

CS Lewis plays on the picture of God as artist in the Narnia series.  In the founding of Narnia, Aslan brings the world into being through a song.  It is an art form that expresses Aslan’s heart, passion, will, and desire.  A deep singing voice brings out the stars; the grass grows through the sound of gentle, rippling music, while lighter notes produce primroses. All this beauty comes out of the lion’s mouth – the word, the expression of Aslan.3

The Word: God expresses himself

With that image in mind, consider this rephrasing of the first verses of John’s gospel:

In the beginning God expressed himself,
He revealed his nature and his goodness.
And that expression which resulted in light and goodness, truth, order and beauty was with God,
It surrounded him, was part of him, because it showed who God was,
It was God’s nature and character overflowing into revelation.
God’s act of expressing his goodness was from the beginning.
In fact, everything was made by God as he revealed his nature.
Nothing was made that did not make him known in some way.
Everything has the stamp of God on it.
All creation says, “This is what God is like.”
In addition, when God expresses himself, when he speaks, when he reveals who he truly is, the result is life.

What does it look like in real life?  How can we grasp this grand picture of God expressing his glory and goodness and beauty so that it means something to us personally?  God answered that question for us:

The Word became flesh and blood, and moved into the neighborhood. We saw the glory with our own eyes, the one-of-a-kind glory, like Father, like Son, Generous inside and out, true from start to finish (John 1:14 msg).

God shows us what he is like in a language we can understand.  He expresses himself in a way that makes sense to us, in a way that can be heard, and seen, and touched (1 Jn 1:1).  Jesus is “God with skin on,” a living, walking, breathing, talking human being who reveals God. We look at Jesus and see God.  When Philip said, “Just show us the Father, that will be enough,”  Jesus replied, “Philip, open your eyes. When you look at me, you see God” (Jn 14:8-9, paraphrased).

I have been with Fellowship International since 1984. Karen and I served in Pakistan for 14 years and returned to Canada in 1999. I have continued to be involved in Bible translation traveling twice a year to Pakistan. My current role with Fellowship International and Northwest Baptist Seminary is as Coordinator of International Leadership Development
View all posts by Mark Naylor →
This entry was posted in Bible Translation, Hermeneutics, Theologizing and tagged Bible Version, Language, Sindhi, Translation. Bookmark the permalink.

4 Responses to 94. God as Artist: Expressions of Goodness