NOTE: Articles 90 – 93 on Navigational tools for Church Missions have been revised and incorporated into a single article through Catalyst Services and is ready to be downloaded

The transitions and tools described in the following articles are used as the framework for coaching Fellowship churches in Canada.  If you are interested in exploring a coaching relationship for your church’s missions efforts, please contact Mark via the contact link below.

I was traveling in a public van from the To 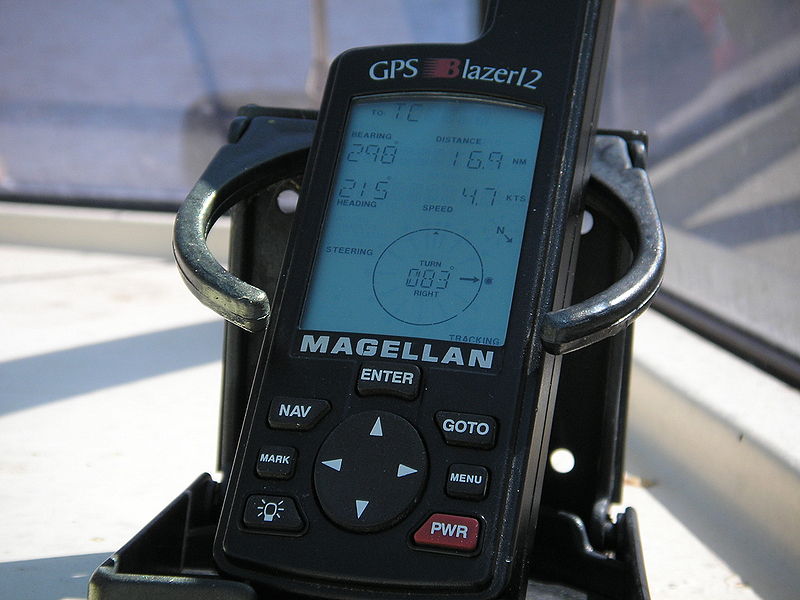 ronto airport to Guelph, Ontario on my way to a meeting.  The driver had to drop off a number of people and then it was my turn.  He checked the directions on his GPS, turned a couple of corners, chose the right road and we drove a couple of blocks.  But then the road ended!  His GPS showed the road going straight through, but reality revealed a massive ravine. Imagine if the driver had said, “This is impossible, the map can’t be wrong.  There is supposed to be a road through here.  Everybody close their eyes and I’ll just gun it!”  Fortunately, he didn’t. Instead, he phoned for new directions, turned around and found the destination.  When reality doesn’t match the map, discard the map, not reality.

In his article Navigating Missional Waters, Len Hjalmarson1 argues that the familiar landscape of our cultures and communities has shifted so dramatically that our default patterns of doing church – our “maps” for successful ministry – no longer work.  Due to globalization, the mosaic of nations visible in each major urban center, the explosion of technology and many other changes that come at us hard and fast, the comfortable organizational structures and patterns of the past no longer fit with the new reality. Following an Eddie Gibbs’ metaphor, Hjalmarson suggests that we need to discard the maps and develop navigational skills. 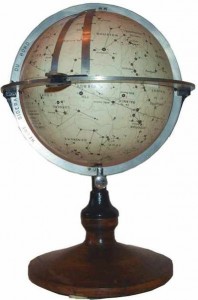 Map readers have the skill of matching corresponding points on a map with the environment. By following the indicated direction and occasionally referring to the map, a traveler can reach their destination.  On the other hand, navigators have a different set of skills.  In an environment where the terrain is constantly shifting, such as on an ocean, navigators rely on unchanging reference points outside of the world.  In a previous era they would rely on the north star; today, the signals from satellites provide the information.  In this scenario, maps are useless, even high density satellite photos from Google!

As I have been learning to coach churches2 for effective missions involvement, I have come to the conclusion that church missions teams3 need to step back from their familiar ways of approaching missions in church (the “maps”) and develop a different approach to missions (“navigational skills”) that will allow them to connect relevantly with God’s global mission and lead their church to significant involvement.  In this series of articles, I will discuss three key transitions that will enable missions teams to serve their churches well.  These include a transition 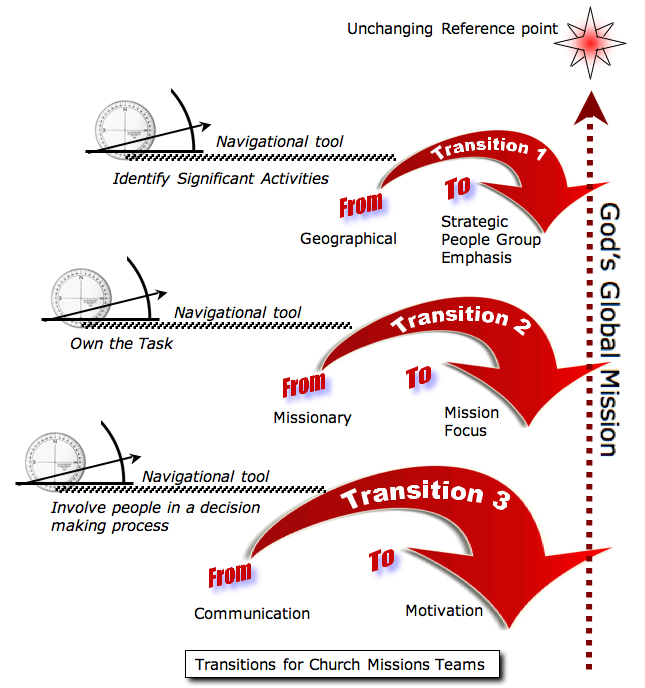 These three navigational tools are used by missions teams to respond to the new reality by aligning their priorities to the one unchanging reference point of God’s mission.  A brief overview of each transition is provided below. An explanation of how the navigational tools facilitate those transitions will be discussed in follow-up articles.

Transition 1: From a geographical to a strategic people group emphasis

As recent as 3 decades ago, the primary concern of many missions committees was support and prayer for missionaries who traveled to other countries to preach the gospel. This relatively simple formula emphasizing geographical distance has given way to a far more complex reality. With global immigration, instant communication and the recognition of the west as a legitimate mission field, missions is now “from everywhere to everywhere.”  Rather than empowering missions committees, the result has often been confusion and frustration.  Some committees have insisted on maintaining their traditional role of promoting and communicating with those who travel to foreign lands.  This has often led to stagnation and limited impact within the church. Others have become overwhelmed with new responsibilities and opportunities, many of which (e.g., camps, marketplace ministries, local outreach, etc.) do not fit the traditional understanding of missions.  A myriad of choices without any guidance to determine legitimate priorities often results in a decrease in missions impact.

a redemptive concern for all the nations

The purpose of this transition is to set parameters that establish a biblical understanding of missions while addressing the new reality.  The biblical narrative of God’s mission reveals a redemptive concern for all the nations (people groups).  To address this desire of God for the nations, missions teams are encouraged to limit their responsibilities to cross-cultural ministry initiatives that occur outside of the normal interactions and relationships of the church body.  Paradoxically, dealing with fewer choices actually empowers missions teams to consider what constitutes legitimate and strategic involvement.

As I walked one church through this transition, the face of one man visibly brightened. He had carried the burden of the missions team for a number of years.  “It is so helpful to know what we don’t have to worry about,” he exclaimed.  “Now we can focus on those ministries that we know constitute missions.”

The following article will describe the navigational tool (identify significant activities) that can be used to develop realistic and clear parameters for missions teams.

Transition 2: From a missionary to a mission4 focus

the missionary becomes a partner with the church

The transition to a mission focus helps to resolve this difficulty through the development of a purpose that is owned by the church.  The missions teams develop a vision of involvement in God’s mission that excites them and provides significant ways for the congregation to participate.  In this scenario, the missionary becomes a partner with the church so that both are working towards a common goal.  A clear understanding of a task that contributes to God’s global purposes provides the church with a greater level of input and responsibility in directing the efforts of their missionaries.  This opens the door to the emotional investment that is necessary for people to develop a deep commitment to missions.

A further article will explain the navigational tool (own the task) that will move the church to make a significant investment towards “owning” their part in God’s mission.

One of the greatest frustrations commonly expressed by missions committees is that, despite their best efforts at communication, people remain unaware of the work that their missionaries are doing.  The answer is not better communication methods.  In this age of an overwhelming flow of information from all directions, people have developed keen filters to identify the small percentage of news that immediately relates to them, while instantly dismissing the rest.  If they do not have a personal investment in a missionary, any incoming information will be filtered out. As a result, mission teams’ need to shift their effort from communication to motivation.  Once a person has invested in an aspect of missions, they will seek out information and welcome it, rather than filtering it out.

motivation is generated through participation in a decision making process

However, motivating others is a skill that needs to be learned.  The bottom-line principle is that motivation is generated through participation in a decision making process.  When the missions team discovers how to empower others to invest in and shape the direction of missions in the church, then the excitement begins to grow. Because God’s heart is for the nations, his Spirit is moving among his people for that purpose. Missions teams who learn how to tap into that reality will see a transformation in how their church responds to missions.  The navigational tool (involve people in a decision making process) to accomplish this will be described in detail in a later article.